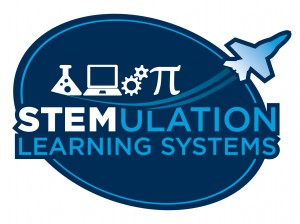 Imagine going to high school and instead of sitting at a desk, you take a seat inside a flight simulator rivaling the top systems used to train fighter pilots. STEMulation Learning Systems has brought that reality to life in public schools in Minnesota and Colorado by designing and installing sophisticated flight simulation labs. Featuring Lockheed Martin’s Prepar3D simulation software, the labs contain multiple cockpit types and student-directed air traffic control stations. STEM instruction is literally being taken to new heights within these schools.

The flight sim labs stimulate student’s interest in STEM subjects by harnessing the nearly universal fascination with aviation. The schools are leveraging this interest in aviation by using the simulators as teaching tools for math, physics, science, geography and even meteorology. St. Paul City Council Member Dan Bostrom, a long time backer of innovation in the schools, says “we use aviation as the hook to get kids interested in Science and Math. It has succeeded because parents and administrators have backed the original vision of teacher/aerospace coordinator Jill Wall”. Another key to success is making the flights as realistic as possible. By using accurate flight controls, instruments, cockpits, radio communications and seamless curved visual displays (wrapping around the pilot) students are fully immersed in their flights and “buy in” to the experience.

The results speak for themselves. After experiencing outstanding results with their first flight simulation lab, Saint Paul Public Schools expanded their Aviation Magnet program from a single school to three schools. Students can now remain within the Aerospace learning track all the way from Pre-K through the 12th grade. This “Kindergarten-to-Diploma” Aerospace learning track is the first of its kind in the nation.

The flagship flight simulation lab is located deep within Johnson Aerospace & Engineering High School in Saint Paul, Minnesota. Seven flight simulators are matched up with seven Flight Controller Stations. This gives the lab the capacity to engage large groups of students as both pilots and air traffic controllers. Two of the systems are Surround View Flight Simulators (SVFS), which are similar to the $3 million Tactical Operational Flight Trainers (TOFT) used in military flight training. The SVFS features a ten foot diameter seamless spherical screen that wraps around the cockpit, providing a 230 degree horizontal field of view. Five of the machines are Dual Seat Flight Simulators (DSFS). These also feature a seamless curved screen, six feet across and three feet tall. The students, as pilot, co-pilot and flight controller work together to accomplish the assigned tasks during their flight.

Flight Sim Lab teacher Scott Schaffer (a pilot himself) says, “The simulators allow me to put students in real life flight scenarios. The pre-flight briefing students get prior to their flight is camouflaged learning of Physics and Math. The end result is learning physics and math in an effective, practical way.”

More information and videos at www.STEMulationlearning.com. 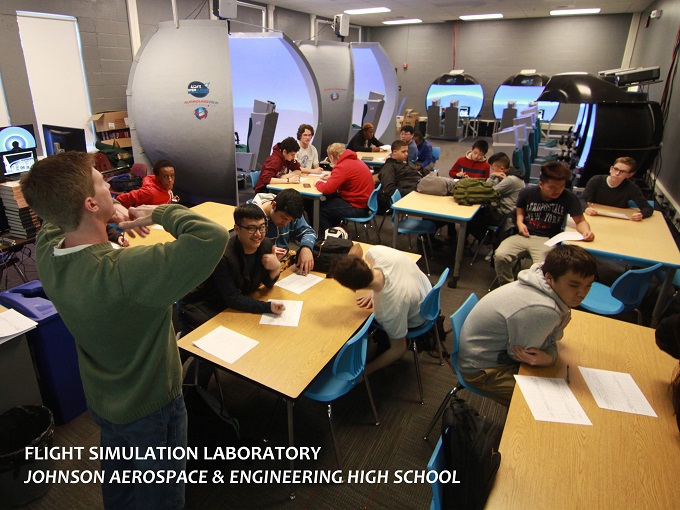 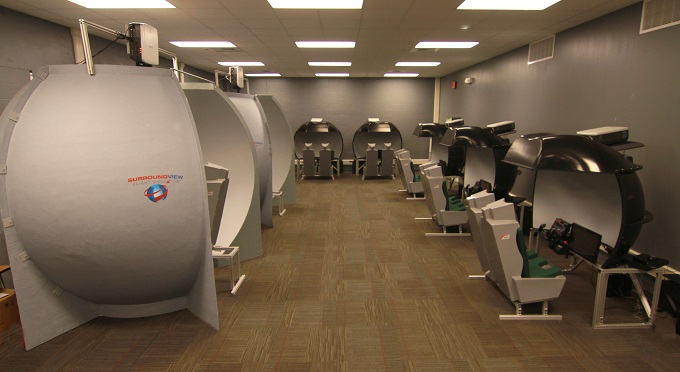